Johor Bahru (JB) is great for a weekend getaway for some affordable food and shopping especially with the latest ringgit exchange rate (1 SGD to about 3 Malaysian Ringgit) but getting there can be quite a hassle at times – if you drive, you can spend hours stuck in the causeway jam; if you take a bus, you will likely also get caught in the same jam and still have to endure the hours of queuing at the Malaysian customs checkpoint.  Walking along the causeway is another option but you will have to endure the vehicle fumes, hot weather and some parts of the causeway where you have to cross quickly amidst the busy traffic.

Getting to Woodlands Train Checkpoint

The Woodlands Train Checkpoint is not within walking distance from Woodlands MRT station.  Getting to Woodlands Train Checkpoint is straightforward by car and taxi – there is a drop-off point as you can see in the picture below.  Do note that you do not end up at the other Woodlands Checkpoint where buses, cars and motorcycles go to cross the causeway to Malaysia – if your car ends up there, it will be quite a hassle for you to get back to Singapore (I am not sure if the immigration officials even allow for that) or you will have to go all the way to JB and come back from there.

If you are taking public transport, you can take buses from the following stations along the North-South line:

Woodlands MRT – go down to the Woodlands Regional Interchange

Marsiling MRT – go to the bus stop opposite station

Kranji MRT – go to the bus stop opposite station.  You will see long queues waiting for bus 170 at the bus stop beside the station – don’t queue there

The Woodlands Train Checkpoint bus stop is quite near to the taxi stand you see below (just a 2-3 minute walk away).

There are many other buses from Changi Airport (Transtar Express TS1 (S$10)), Resorts World Sentosa (Transtar Express TS8 (S$7)) and Queen Street Bus Terminal (Singapore-Johor Express (S$4) or the Causeway Link Express (S$2.50)) to Woodlands Checkpoint (not the Woodlands Train Checkpoint).  If you had boarded one of these buses or one of the public transport buses to reach Woodlands Checkpoint – don’t worry, you can still walk to the Woodlands Train Checkpoint via a bridge (just make sure you don’t clear immigration customs before you do that). 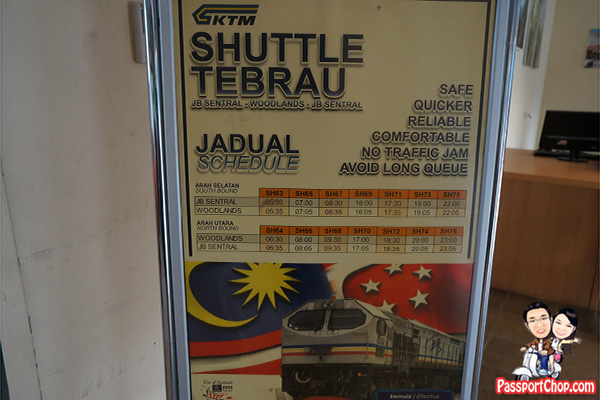 You can buy your Shuttle Tebrau train tickets online at https://intranet.ktmb.com.my/e-ticket/. Payment will be in Malaysian ringgit and can be made by Singapore credit card. There is a RM$2 admin charge on top of the ticket price (RM$16). You will need to register an account at that KTM train ticket website and you will also be prompted to select seats – just anyhow choose – it is free seating. You will need your passport number to complete the purchase. Once you have purchased your Shuttle Tebrau tickets, remember to print it out – you will need to show it to the KTM staff at the Woodlands Train Checkpoint.

You can also buy the Shuttle Tebrau train tickets over the counter at the KTM office on level 1 – as you enter the Woodlands Train Checkpoint building, the KTM ticketing office is on level 1 on your right.  You can purchase tickets here up to 20 minutes before the train is scheduled to depart. Payment is by Singapore dollars only. After you bought your tickets (or if you already have your printed e-tickets), go to level 2.

At level 2, you will see a sign “Queue for departing train passengers”.  This is the entrance to the immigration checkpoints and train platform.  We arrived here at 8.35am for our 9.30am Shuttle Tebrau train and the doors to the immigration checkpoints were closed.  The queue was quite orderly – waiting passengers were seated on the row of chairs along the wall but things started to get chaotic at around 8.45am as the crowds start to come in and some of the passengers at the back decided to walk to the front to form their own standing queue, disregarding the “sitting” queue (those seated at the chairs along the wall) and then everyone started scrambling as those seated realised that they lost their place in the queue.  Before the doors were opened, a KTM staff went around the queue to check the tickets of those in the queue – this is the only time tickets were checked.  The doors finally opened at around 9am.

Delay in Shuttle Tebrau Saturday 9.30am Train from Woodlands to JB Sentral

If you can make it, I suggest going for the earlier Shuttle Tebrau train timings from Woodlands on weekends.  We took the 9.30am train and while the train journey was only 5 minutes, our train departed 45 minutes late (leaving Woodlands Train Checkpoint only at 10.15am instead of the scheduled 9.30am departure)! I am not sure of the reason for the delay but I speculate that it could be because the door was open only at 9am for a 9.30am departure plus the huge weekend crowd for the Shuttle Tebrau (i think it was fully booked or overbooked because there were not enough seats for all passengers and quite a number had to stand).  Considering the weekend crowd, the authorities should have opened the doors earlier so that some people can clear both Singapore and Malaysia immigration earlier – there could have been a bottleneck that caused the delay.  My assumption is that because this is the last train out of Woodlands until 5pm, they could have made the decision to hold off the train departure until everyone had cleared immigration.

The condition of the train itself was quite ok for a 5 minute ride – generally clean – the seats were spacious.  Take a look at the next few pictures on what the Shuttle Tebrau KTM train interior and train toilets look like.

If you want to see the busy traffic on the causeway as your Shuttle Tebrau train zooms past them, choose a front-facing seat on your left (sit on your right for the journey back).  The train is free seating so you sit anywhere you like as long as there are seats.

Arrival at JB Sentral station via Shuttle Tebrau – you already cleared Malaysian immigration at Woodlands Train Checkpoint so all you have to do is take the escalator up to the next level and follow directions and you are done with your short train journey from Woodlands.

This is the JB Sentral station – lots of food and some shopping and a lot of real estate agents selling the latest condominium development in different parts of Malaysia.

This is the KTM ticketing counter at JB Sentral.  From what I have read from other blogs, it seems that to buy a ticket, you need to press for a queue number and wait for your queue number to be called before going to the counter to buy your ticket.  I can’t verify this as I took a bus back.

Here comes the exciting part after exiting JB Sentral – this walkway links to great shopping and eating places at City Square and Komtar JBCC all without stepping a foot on the roads of Johor Bahru at all so it is quite safe.  We have all heard of horror stories of JB robbery but if you stick to these 2 big malls, you are generally quite safe as you won’t be walking out in the open in isolated alleys.  There is a lot of pedestrian traffic from JB Sentral station all the way to the 2 malls.

As you enter the walkway, on the left, you will find City Square with H&M, F.O.S and many others and ….

… on the right, you will find Komtar JBCC – another big shopping mall (a relatively new one).